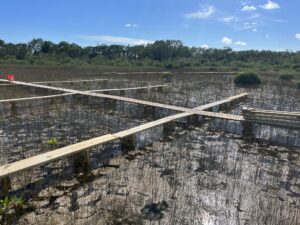 The model lands project is in the Southern Glades Wildlife and Environmental Area immediately north of the C111 canal and to the west of US 1. The project is focused on wetland adaptation to stressors such as climate change and sea level rise. 72 1m by 1m plots will be used to test a variety of responses including soil elevation change via sediment elevation rods (SETs), nutrient levels in both water and soil, biogeochemical processes, periphyton response, and above- and below-ground biomass. The experimental design will test the ability of a coastal wetland to outpace sea level rise through positive soil elevation change and productivity. The overarching hypothesis is that the addition of sediment and phosphorus will confer the greatest wetland adaptive capacity in a marl coastal marsh. The experiment will also aid in elucidating environmental factors that can hinder positive soil elevation change as well as determine the best methodologies for enhancing coastal wetland productivity..…Read more about this project 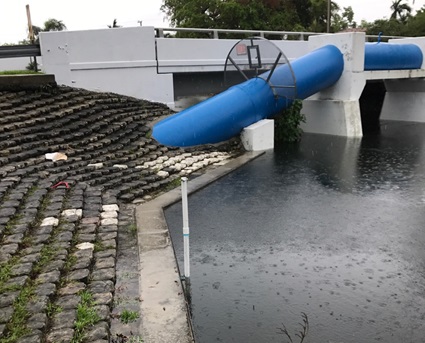 Coastal wetlands provide essential direct livelihood services to millions of people, as well as critical regulating services such as maintenance of water quality, protection from storms and erosion, and carbon sequestration. Measuring the vertical movement of the coastal wetland surface and its constituent processes, and relative local sea-level rise (SLR) is necessary to determine whether a wetland can keep pace with SLR.

Tidal data can assist in understanding localized flooding associated with king tide flooding and sea-level rise. These data are an important resource for hurricane preparations and for recreational use about boat clearance through rivers and canals.

Four monitoring stations are being established: 2 tidal stations at Blue Road and Isla Dorada Boulevard bridges and 2 tidal and soil elevation monitoring sites in Matheson Hammock and a mangrove site near Coral Gables Marina.…Read more about this project 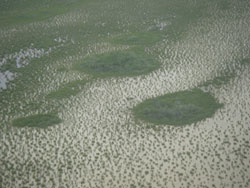 In the southeastern Everglades, widespread changes including hypersalinity, marine transgression, reduced macrophyte productivity, and expansion of degraded habitat known as the “white zone” have occurred over the last 50 years. Modified freshwater delivery due to water management and background sea-level rise are attributed (Ross et al. 2000). In Taylor Slough, water management has altered the timing and duration of flooding resulting in the conversion of areas of open water slough to short hydroperiod marsh. Our goal is to understand how changes in quantity, timing and quality of water deliveries will affect Taylor Slough, downstream wetlands and the Florida Bay estuary.…Read more about this project 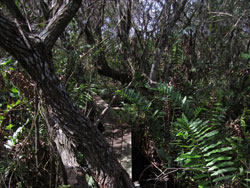 Soil, Water, and Coarse Woody Debris CO2 Fluxes and Aqueous CO2 in a Tidal Mangrove Forest in the Florida Everglades 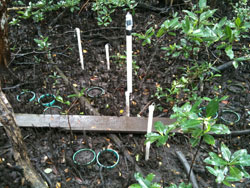 Mangrove forests cover 1% of the continental surface but represent large C stocks (eg. Micronesian forest 400-1400 Mg C ha-1; Kauffman et al. 2011) due to large belowground C stocks. Respiration flux from belowground, as CO2 to the atmosphere or as dissolved aqueous CO2, is a key component of coastal C cycling. Variation in soil respiration fluxes can be a function of numerous physical and biological factors including temperature, root production, benthic microalgae, invertebrates, duration and frequency of inundation, salinity, alkalinity and nutrient availability. Our goal is to quantify soil CO2 flux rates and patterns of aqueous pCO2 as a function of inter- and intra-site variability to elucidate key factors controlling soil respiration fluxes and losses of mangrove forest C.…Read more about this project 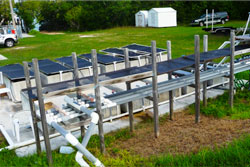 The interlinked biological processes that drive carbon cycling in Everglades coastal wetlands are poorly understood but critically important for predicting responses to sea-level rise, climate change, and outcomes of Everglades restoration. In conjunction with several co-investigators, our overall objective for this work is to quantify the effects of multiple drivers on C cycling in Florida Coastal Everglades ecosystems. Results of this and future experiments will guide development of biogeochemical models leading to an understanding of the effects of sea-level rise and water management strategies on coastal peat stability….Read more about this projects 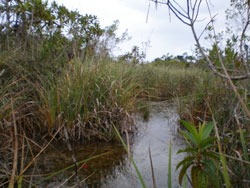 Tropical peatlands have important conservation value. These wetlands often support animal and plant species that are rare or of otherwise limited distribution, maintain freshwater and coastal water quality and preserve large stocks of atmospheric carbon despite their small spatial extent. Natural gradients such as those arising from peatland ecosystem development provide an important framework for investigating patterns and processes contributing to ecosystem structure. Research on tropical peatlands is growing but these systems are still poorly studied, especially in the Neotropics. Our overall goal for this work is to contribute to a growing understanding of the importance of peatland ecosystem conservation in Tropical America. Our studies focus on plant-soil interactions mediated by nutrient status, especially in the context of community structure linkages, organic matter decomposition and ecosystem carbon storage.…Read more about this project