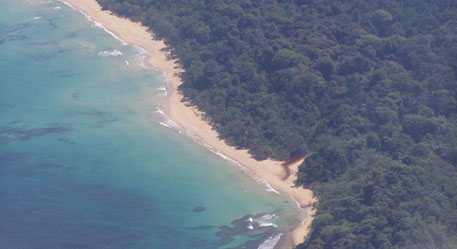 This region of the Caribbean coast, predominantly from the southern coast of Costa Rica to the Chiriqui Lagoon of Panama encompasses an alluvial floodplain that drains numerous rivers from the Talamanca mountains.

Tropical peatlands have important conservation value. These wetlands often support animal and plant species that are rare or of otherwise limited distribution, maintain freshwater and coastal water quality and preserve large stocks of atmospheric carbon despite their small spatial extent. Peatland development often results in increasing peat depth and nutrient deficiency resulting from increasing influence of atmospheric deposition as the sole nutrient source and as the peat surface simultaneously “raises” over mineral soil. Natural gradients such as those arising from peatland ecosystem development provide an important framework for investigating patterns and processes contributing to ecosystem structure.

Research Objectives
Research on tropical peatlands is growing but these systems are still poorly studied, especially in the Neotropics. Our overall goal for this work is to contribute to a growing understanding of the importance of peatland ecosystem conservation in Tropical America. Our studies focus on plant-soil interactions mediated by nutrient status, especially in the context of community structure linkages, organic matter decomposition and ecosystem carbon storage. 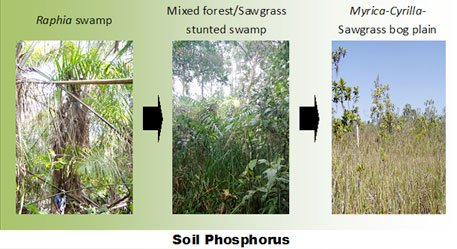 This peatland is characterized by a phosphorus gradient which has been shown to be associated with the sequential development of a tropical ombrotrophic peat bog leading to progressive P depletion over the last 10,000 years. The decline in soil P coincides with changes in the aboveground canopy structure within the coastal peatland. The green shading depicts relative soil phosphorus content.

Our findings illustrate that

Contact Tiffany Troxler for more information about this project or research opportunities.